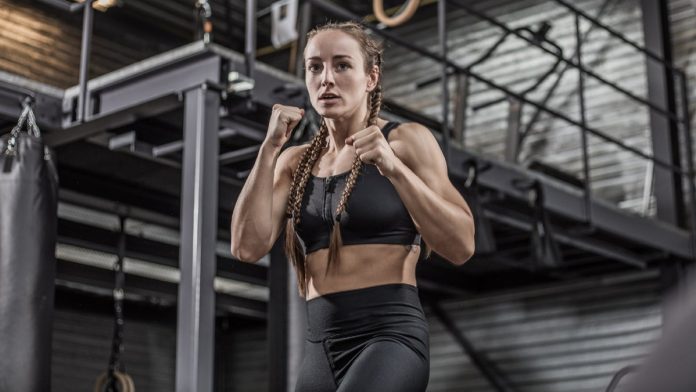 Become a member to unlock this story and receive other great perks.

These women are tough, well-respected and in amazing shape.

Want to be a little more like them, at least from an “in shape” standpoint? (You know, minus all the blood and broken bones.) Try the following MMA high-intensity interval training workout, designed by Charlotte, North Carolina–based Adam Zart, a strength and conditioning coach and instructor at Hayastan MMA.

Similar to Zart’s boxing HIIT workout, this a great conditioning routine that can be done at home with no equipment — albeit slightly more involved.

“This MMA workout is essentially an advanced version of the boxing routine,” Zart says. “You’re doing bigger movements and more variety of strikes. There’s also added ground work in the form of burpees and mountain-climber variations, since MMA isn’t just about being on your feet like boxing. The ground stuff makes for a completely different type of cardio than standing.”

Bodyweight only, plus a timer; jump rope optional but recommended.

Roughly 25 minutes, with an option to extend the workout up to 34 minutes for highly advanced and conditioned individuals.

Do the following exercises one after the other without resting in between moves, keeping the intensity moderate. Do 45 seconds of work for each of the following moves:

If you have a jump rope, do steady-paced “single-unders” for the duration. If you don’t have a rope, just simulate it by jumping a few inches off the floor while also mimicking the arm motion.

Zart’s Commentary: “Here, we’re just getting the body warmed up, the heart rate increased, and the shoulders and calves ready for the boxing drills.”

Zart’s Commentary: “Do the butt kicks and high knees with a fast pace, but you’re still just warming up, so don’t go super hard here.”

Zart’s Commentary: “On the lunge, you don’t have to do full range of motion where the back knee touches the floor. It’s more of a plyometric lunge, going down only halfway or so.”

From your fighter’s stance, throw a jab with your front hand, then a cross with your back hand. After the cross is thrown, your head should be over your front leg. From there, throw a front (push) kick with your other leg, letting it land in front of you. With the leg that’s now behind you, throw three powerful knees in succession — driving your knee forward and upward while pulling your hands down to mimic striking an attacker in the face. After the third knee, step back with your front leg to return to the original fighter’s stance. Repeat this combo for the allotted time.

Zart’s Commentary: “Really drive your hip through on both the front kick and knees. These should be powerful moves. Imagine there’s a bad guy on the other end of these strikes.”

Start in a fighter’s stance, legs staggered and hands up. Step your lead leg back so that your feet are in line with each other, around shoulder-width apart. Keeping your hands up, lower down into a squat. When your thighs reach parallel with the floor, put your hands on the floor directly below your shoulders and kick your feet back behind you to full knee extension. As your feet are hitting down, drop your hips to the floor while keeping your head and chest up and your arms fully extended. The bottom of the movement will look like a yoga Cobra Pose. From here, pop your feet back forward and underneath you, stand up out of the squat and return to the original fighter’s stance. That’s one rep.

Zart’s Commentary: “This is an MMA-specific variant of burpees, a full-body conditioning exercise that most people are familiar with. One reason I like this version is because you’re getting a nice stretch at the bottom of each rep in the abdominal wall and down through the hip flexors.”

From your fighter’s stance, throw a jab with your front hand, then a cross with the back one. After the cross, your head should be over your front leg. From there, throw a roundhouse kick with your back leg and let that foot land in front of you. Perform a step-through elbow with your rear arm, then finish with a cross with the other arm. Take a few steps back to your starting spot, and repeat the combo for the allotted time.

Zart’s Commentary: “This is a great MMA combo because a number of different strikes are utilized — two different types of punches, a big kick and an elbow. Even though you’re doing this for conditioning, don’t just go through the motions on the strikes. Keep your movements intentional and under control yet aggressive.”

From a push-up position (hands below your shoulders, body rigid from head to heels), perform a standard two-count mountain climber: Pull one knee forward toward your chest and in between your arms, then immediately move it back while pulling your opposite knee forward. Perform the same basic motion for the next two counts, only with your knees going outside your arms. Repeat the four-way sequence (inside-inside-outside-outside) for the allotted time.

Zart’s Commentary: “Mountain climbers in general are a great core, shoulder and anaerobic cardio workout, which works perfectly for MMA because of all the ground work. This specific variation just adds a little more hip mobility to the move.”

From your fighter’s stance, throw a jab with your front hand, then a cross with the back one. After the cross, your head should be over your front leg. From here, throw an elbow with your lead arm, then an upper-cut punch with your rear one. Throw two knees with your back leg (same technique as in Round 1), then step back and do a sprawling burpee down to the floor. Come back up, return to your fighter’s stance and repeat for time.

Zart’s Commentary: “This combo pretty much puts everything together that you did in previous rounds, plus the addition of a burpee at the end of each strike sequence. This is a taxing combo that’s great for conditioning and working on technique in a fatigued state.”

Zart’s Commentary: “You’ll get a similar shoulder and conditioning stimulus here as with the mountain climbers, but pulling both knees together each time will provide slightly different core action.”