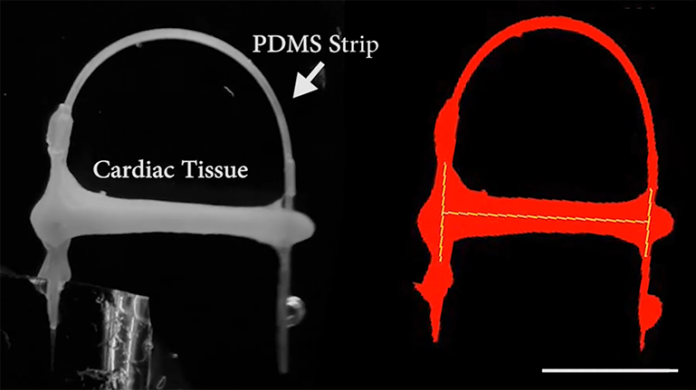 Researchers at Carnegie Mellon University, along with collaborators in the Netherlands, have developed a heart model consisting of engineered cardiac muscle tissue that is attached to an elastic material. The design allows the team to mimic the mechanical forces experienced by heart tissue in the body, which should provide them with more accurate data when using the model to replicate disease or study the effects of various treatments. The design may eventually lead to new ways of more accurately recreating heart muscle tissue in the lab, which could function as replacement tissue for cardiac disease patients.

Tissue engineering is coming along in leaps and bounds. While researchers haven’t yet been able to grow new transplant-ready organs in the lab, they are getting closer every year. This latest technology aims to grow cardiac tissue under conditions that mimic the mechanical forces the heart experiences while beating.

“Our lab has been working for a long time on engineering and building human heart muscle tissue, so we can better track how disease manifests and also, create therapeutic tissues to one day repair and replace heart damage,” said Adam Feinberg, a researcher involved in the study, in a CMU press release. “One of the challenges is that we have to build these small pieces of heart muscle in a petri dish, and we’ve been doing that for many years. What we’ve realized is that these in-vitro systems do not accurately recreate the mechanical loading we see in the real heart due to blood pressure.”

The hemodynamic loads experienced by cardiac tissue may be important for their normal development, but also play a role in certain cardiac diseases. These loads involve the stretch experienced by cardiac cells as the heart chambers fill and also the forces exerted when the heart beats. To replicate these forces in vitro, the researchers attached engineered heart tissue to an elastic polydimethylsiloxane strip that the tissue pulls against as it beats.

The technology allows the researchers to better replicate various clinical scenarios and probe the mechanics behind cardiac disease. “One of the really important things about this work is that it’s a collaborative effort between our lab and collaborators in the Netherlands, including Cardiologist Peter van der Meer,” said Feinberg. “Peter treats patients that have genetically-linked cardiovascular disease, including a type called arrhythmogenic cardiomyopathy (ACM) that often becomes worse with exercise. We have been able to get patient-specific induced pluripotent stem cells, differentiate these into heart muscle cells, and then use these in our new EHT model to recreate ACM in a petri dish, so we can better understand it.”

See a video about the project:

Providers have unanswered questions ahead of COVID-19 grant reporting deadline