HomeTechnologyInflatable Prosthetic Hand with a Sense of Touch
Technology

Inflatable Prosthetic Hand with a Sense of Touch 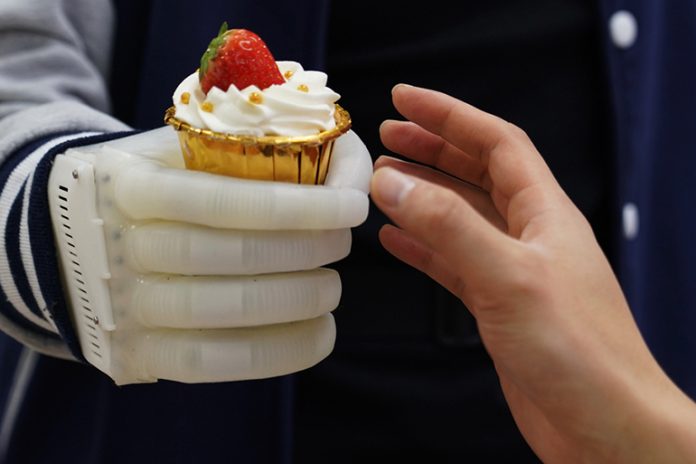 Researchers at MIT and Shanghai Jiao Tong University created an inexpensive robotic hand intended for use by upper limb amputees. The device is more like a soft robot than previous robotic prostheses, and includes inflatable components and pneumatics, making it lightweight and inexpensive. Excitingly, the hand is equipped with sensors and provides some tactile feedback as users interact with objects. The researchers hope that the technology could lead to affordable and viable neuroprosthetic devices, particularly for amputees in low-income regions of the world.

Neuroprostheses are rapidly expanding what is possible for amputees. Such devices can detect the intention of a user based on their muscle or neural activity at the interface between the residual limb and the device. Using this data, the mechanical prostheses can respond accordingly, allowing a wide range of movements and activities, such as grasping objects.

However, to date, such devices come with a massive cost, putting them out of reach for many people. They can also be pretty heavy as a result of their metal components and the motors that power them. This new technology is intended to be a lightweight and inexpensive alternative to such devices. The components for this new robotic hand cost approximately $500, making it much more affordable, and the entire device weighs just half a pound.

“This is not a product yet, but the performance is already similar or superior to existing neuroprosthetics, which we’re excited about,” said Xuanhe Zhao, a researcher involved in the study, in an MIT press release. “There’s huge potential to make this soft prosthetic very low cost, for low-income families who have suffered from amputation.”

The prosthetic hand consists of a 3D printed palm and five inflatable fingers. The fingers contain fiber segments that act as ‘bones’ and a pneumatic system allows the fingers to flex and bend quite precisely. The device can make a range of predetermined movements, including pinching and making a fist, and uses electromyography sensors to connect the user’s residual limb to the prosthetic and ensure that the movements are based on the user’s intention.

Strikingly, the system also incorporates tactile feedback. This occurs through pressure sensors on each fingertip of the prosthetic, which connect with the residual limb, allowing the user to feel where and how much pressure is being exerted on each finger. At present, the system incorporates four predetermined grasp types, but the researchers hope to expand this repertoire.

“We now have four grasp types. There can be more,” said Zhao. “This design can be improved, with better decoding technology, higher-density myoelectric arrays, and a more compact pump that could be worn on the wrist. We also want to customize the design for mass production, so we can translate soft robotic technology to benefit society.”

See a video demonstration of someone using the technology below.

The spaces in between: Moving DEI beyond the status quo