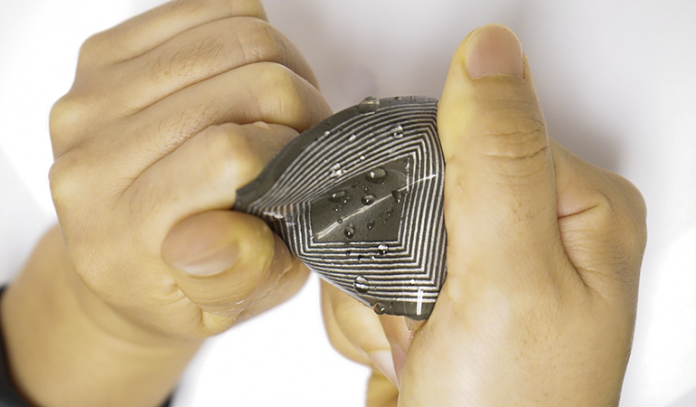 A team of scientists at University of California Los Angeles created a magnetoelastic device that can generate electricity from movements of the body, including the movements caused by the pulse at the wrist. The patch-like device may help to power medical wearables or implantable sensors, and may function as a waterproof heart rate monitor in its own right. The technology is based on the magnetoelastic effect, in which small magnets within the material move closer and farther away from each other as the material flexes. This causes the strength of the magnetic field to change, generating electricity.

Wearable and implantable technologies have significant potential and utility for a host of medical applications. However, two common sticking points for these technologies are their power source and protecting them from the liquids within and on our bodies. Batteries need to be replaced and/or recharged, and bodily fluids have a habit of destroying electronics of all sorts.

This latest technology aims to address these issues, and the researchers behind the device claim that it is waterproof and can derive power from simple body movements. It contains microscopic magnets dispersed in a flexible silicone matrix. As the silicone flexes, the magnetic particles move closer to and farther away from each other, generating electricity.

“Our finding opens up a new avenue for practical energy, sensing and therapeutic technologies that are human-body-centric and can be connected to the Internet of Things,” said Jun Chen, a researcher involved in the study. “What makes this technology unique is that it allows people to stretch and move with comfort when the device is pressed against human skin, and because it relies on magnetism rather than electricity, humidity and our own sweat do not compromise its effectiveness.”

Excitingly, the silicone patch does not require large movements to generate electricity, and even subtle movements, such as a pulsating blood vessel beneath the skin of the wrist, are enough to produce an electrical current. These properties mean that it may be suitable as a self-powered pulse monitor, with the added benefit of a water proof device. So far, the researchers have soaked the device in artificial sweat for as long as a week, with no loss of performance.