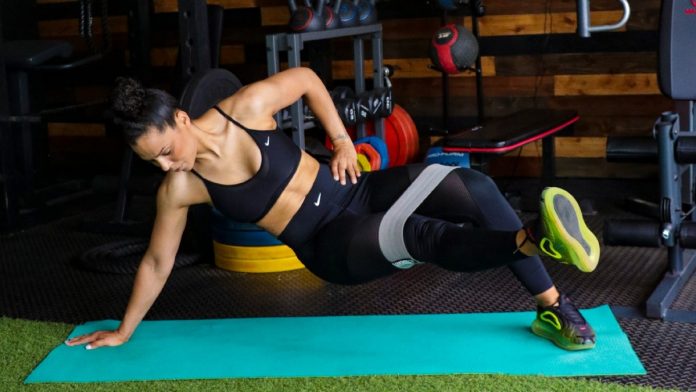 Training your core isn’t just about isolating your midsection with bodyweight planks, crunches and other abdominal moves. That’s all great, but bringing in some extra resistance helps step up the intensity a notch — and “mini” resistance bands in particular are one of the most effective tools for training the core.

That’s the basis of the following workout, designed by ISSA-certified trainer Aneshea Shali, owner of Core Camp Challenge, to target the core by bringing in foundational lower-body movements like squats and lunges. All four of the exercises in this routine use a mini band and are what you might call “combo” moves because they combine multiple movements into one. One of the exercises also incorporates a light dumbbell.

“You can absolutely train the core effectively with bodyweight only,” Aneshea says, “but sometimes it’s good to challenge those muscles with resistance, especially when we’re talking about full-body moves. Plus, mini bands are easy to use and inexpensive.”

By the time you finish your third round of the circuit, you’ll have essentially done eight different exercises in less than 30 minutes — and targeted the core in every one of them, albeit in different ways. As a bonus, you’ll get a nice workout for the glutes, quads and hamstrings through the lateral squats and reverse lunges. Legs and core make for a great summer combo!

Do each of the following exercises one after another as a circuit, 10 to 12 reps per move. After you’ve completed one round of the circuit, rest one to two minutes and repeat the circuit for two more rounds.

This routine requires a mini band and a light dumbbell. If you don’t have a dumbbell, any light, weighted object you can easily hold in both hands will work (weight plate, kettlebell, water jug, etc.)

Execution: Lie faceup on the floor with your legs bent, feet flat on the floor and a mini band around your legs just above your knees. Contract your glutes to thrust your hips upward so that your thighs and torso form a straight line (aka glute bridge). In the top position, spread your knees apart to pull the mini band tight (clam). Hold the legs-spread position for one or two seconds, then bring your knees back together and repeat, maintaining the bridge position throughout the set.

Execution: Stand with a mini band around your legs just above your knees. Bend your knees into a half to full squat with your hands behind your head, and hold this position. Take two lateral steps to the right side, stepping far enough on each rep that your feet are outside shoulder width. After the second lateral step, bring your right elbow down to your left knee. Return to the up position and repeat to the other side, taking two lateral steps to the left and bringing your left elbow to your right knee. That’s one rep.

Shali’s Coaching Cue: “Keep the lateral steps slow and under control, keeping your thighs as close to parallel with the floor as possible throughout. Tighten your core muscles to keep your torso upright. With the elbow to cross knee, make that a more powerful move, focusing on the abs and oblique muscles.”

Execution: Begin in a high-plank position (aka push-up position) — hands on the floor below your shoulders, arms extended, feet together and body in a straight line — with a mini band around your legs just above your knees. Kick your feet out to the sides for a plank jack, then bring them back together. Do two reps of these plank jacks. From there, do a plank kick-through to each side, as follows: From the high-plank position, lift your right hand and left foot off the floor and rotate your hips to kick your left foot underneath and across your body to the right. Repeat on the opposite sides (left hand up, right foot kicks across to the left). Two plank jacks and one kick-through to each side is one rep.

Shali’s Coaching Cue: “This is a great combo move for the deep core muscles (while holding the high plank), glutes (kicking the legs out to the sides on the jacks) and rotational core moves (kick-throughs). This will also do a number on your shoulders because you’re holding the plank the entire time. If your shoulders get tired during the set, feel free to take a short rest before finishing your reps.”

Execution: Stand with your feet hip- to shoulder-width apart with a mini band around your legs just above your knees and holding a moderate-weight dumbbell. Begin holding the dumbbell in both hands on your right side (arms hanging down), and step your right foot back into a reverse lunge without letting your knee touch the floor.

Shali’s Coaching Cue: “Keep your hips facing forward when doing the landmine. This will work core stability big time. This is a pretty intense combo exercise, hitting the legs as well as the core and even the shoulders, so go with a very light dumbbell if you need to.”