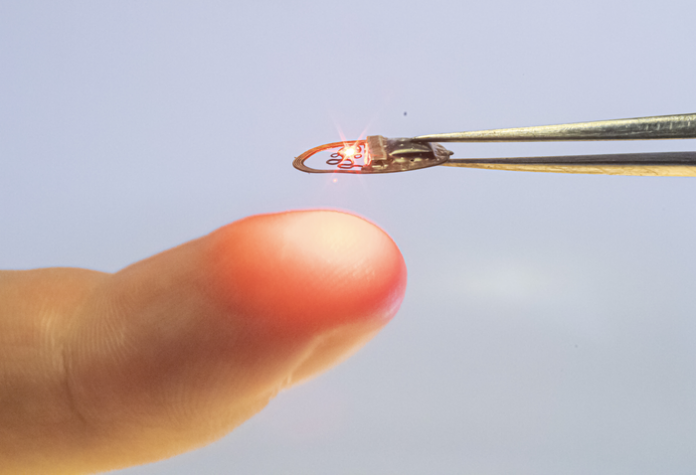 Researchers at the University of Arizona have overcome a major limitation of optogenetics with their wireless and battery-free implant that can shine light through the skull. The small device, which is implanted under the skin, could provide a light source for optogenetics that doesn’t require damage to the skull or brain. While optogenetics is currently an experimental technique that lets researchers learn more about neural circuitry in the brain, it may also one day be a viable therapeutic option for neurological disease.

Optogenetics involves modifying specific neurons with a light-sensitive protein, so that when they are illuminated with light they fire. At present, the technique is invaluable for researchers seeking to understand the complexities of the brain and nervous system, and typically it is used in experimental animals. So far, so good, but the technique is pretty invasive, requiring penetration of the skull and brain so that a light source can be present at the correct location to activate the neurons.

While the technique has huge potential to treat diseases with a neurological basis, such as chronic pain, the invasive nature of the current methodology is a major stumbling block. The light source developed at the University of Arizona aims to change that, and bring us a little closer to clinical optogenetics.

“This technique means we can use optogenetics without having to penetrate the skull or brain tissue, making it much less invasive,” said Jokubas Ausra, a researcher involved in the study, via a University of Arizona announcement. The tiny device has a diameter smaller than a dime and is as thick as a sheet of paper, allowing it to be implanted under the scalp without too much inconvenience.

“This is significant because when optogenetics become available for humans, we have technology that enables seamless light delivery to neurons in the brain or spine,” said Gutruf, who is also a member of the university’s BIO5 Institute. “This means we have a precursor technology that could someday help manage conditions like epilepsy or chronic pain without invasive surgery and chronic use of drugs.”

For now, the technology could make things easier for optogenetics-based research, requiring less invasive procedures in experimental animals. “This tool allows scientists to do a wide range of experiments that were previously not possible,” said Gutruf. “These possibilities enable the scientific community to make faster progress to uncover the working principles of the brain and develop and test treatments in accurate environments. This is important for many areas – for example, enabling drug-free pain therapies to beat the opioid crisis.”

Study in Proceedings of the National Academy of Sciences: Wireless, battery-free, subdermally implantable platforms for transcranial and long-range optogenetics in freely moving animals

Via: University of Arizona

Providers have unanswered questions ahead of COVID-19 grant reporting deadline