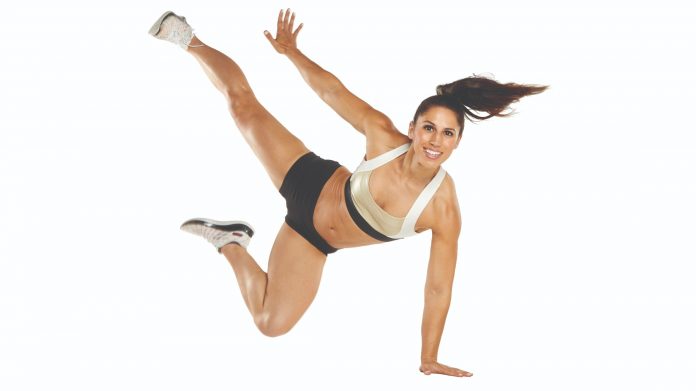 The first time I met Angela Gargano was in a small, cluttered basement room of a massive televangelical church just outside Orange, Connecticut. I was shooting for the September/October 2017 issue of Oxygen with a photographer I had never used before and a random girl from Rhode Island who had pitched herself as a fitness model. This would be an editorial litmus test for me to see whether shooting locally rather than coordinating long distance with a team in California could actually work.

My mystery model, Angela, arrived with big smiles and energy to spare. After finishing her hair and makeup and doing some lighting tests, we shot the four-move workout. It took less than 10 minutes. No matter. Angela was beyond excited to have connected with me and with Oxygen.

That was four years ago. Since then, I have worked with Angela a number of times. She has connected me to photographers, hair and makeup artists, gym owners, trainers and more. I have hired her as a model, an expert, a coach (Warrior Shred), and now as the host and co-creator of our recently launched Fitness Quest series.

Angela sees opportunity in everything and approaches a challenge with tenacity and determination. It’s no surprise that she has been selected to be on American Ninja Warrior four times, and one day I’m certain she’ll win that thing — or blow out a knee trying. (Oh wait, she already did that!) In any case, it’s safe to say she is one of Oxygen’s favorite humans, and I know she will become one of yours, as well. Clearly the litmus test worked.

Angela Gargano has always been passionate about fitness. She was a competitive gymnast all the way through college, but after graduation, she was at a loss for a purposeful activity. “There isn’t much for adults to do in the gymnastics world after college,” Gargano says. “That’s when I started looking into other things like fitness competitions.”

It was an easy fit for her skill set, and Gargano did more than 30 fitness competitions over the course of a couple of years. She won the 2016 Miss Fitness America title with a Jungle Book–themed routine and earned her Fitness and Bikini pro cards. She liked the performance aspect of the sport, but it wasn’t a long- term love. “These competitions definitely taught me to be confident in my own skin, but it was exhausting being on a ‘diet’ year-round,” Gargano says.

Enter NBC’s American Ninja Warrior, where being lean and jacked is just a side effect of training to dominate a creatively masochistic obstacle course. Gargano was helping a friend film a video audition tape to get on the show, but later the videographer insisted that Gargano also make a tape. “I didn’t want to get in my friend’s way,” she says. But eventually she caved, and producers chose her (and not the friend) to be on Season 7.

Not much came of that appearance and Gargano didn’t make it onto TV, but she loved the experience and submitted more audition tapes. Finally, she was picked for Season 9, and this time she received a lot of coverage: Gargano tore her ACL on the course in front of millions of people on camera. “I cannot believe I am where I am today when I see that footage on American Ninja Warrior,” she says. “It just reminds me of how important that injury was and how it helped me become who I am now.”

Back on Her Feet

Gargano went home to lick her literal and figurative wounds. She had surgery to repair her injury, but rather than consenting to couch-potatoism, she leveraged her situation to showcase what you can accomplish while injured through social media channels. Various posts show her pulling off pistol squats, handstand walks and one-handed pull-ups — all while wearing a full leg brace. Gargano also documented her return to Ninja training and confessed to a fear of landing on both feet and putting undue pressure on her recently rehabbed knee. Her raw authenticity and open-book posts made her popular with fitness followers, and as her fan base grew, so did her confidence and her resolve to return to the show.

“I always felt like the underdog in many ways,” she says. “I was told by fitness agencies that I was too ‘manly’ to be featured on a cover, and when I would share my dreams of being in Oxygen or landing a spot on American Ninja Warrior, [there was] always the one person who’d doubt me. Some people get paralyzed by rejection, but it fires me up.”

Less than a year later, Gargano submitted an audition tape to ANW again and was accepted for Season 10. Her return was triumphant, and she went on to compete in Season 11 and most recently Season 13.

Though she’s a devout Ninja, Gargano isn’t yet sure where her future will lead. Her immediate goal is to inspire others through an online community she created called Strong Feels Good. Here, she shares workouts, hosts live classes and talks to others about their fitness goals. “My main focus is to create a massive community of women and teach them how damn good being strong feels,” she says. She also began journaling, meditating and going to therapy. “I wanted to learn more about myself so I can show up for myself and others better,” she says. “Other than that, I want to travel as much as possible!”

Q | Didn’t you used to be a scientist or something?

Yes (laughs). I have a degree in biological chemistry, and after college, I worked at Brown University making compounds to help with prostate cancer. After that, I worked at Genzyme (a pharmaceutical company) making other drugs. I literally had to wear a hazmat suit to work inside these giant tanks and often had to work the overnight shift.

It was pretty insane, but it did lead me to fitness: I was itching to do something more with my life, so I would go running on my midnight “lunch” break. Soon everyone in the company joined me. It was super cool.

Q | What is the most embarrassing thing in your purse right now?

It’s more embarrassing that I don’t have a purse and that I normally stick my credit cards in my bra.

Q | Has anyone ever slept through his or her call time?

No, you are literally waiting in a “holding area,” and they are constantly making sure you are ready. (And awake!)

Q | Do they really shoot ANW in the middle of the night?

Yes, most seasons they shoot overnight because they want it to look good (and consistent with lighting) on TV. Season 13 was shot during the day—but it was just as exhausting!

Q | How often do you eat pizza (or cake, cookies, cheat food in general)?

I honestly have Nutella or a cookie daily. I never deprive myself because I did that enough during fitness competitions, and I love me a good pizza at least once a week. I used to be so scared to eat that stuff until I realized that after I ate it, I looked exactly the same and nothing changed.

As long as you eat clean the rest of the week, a little Nutella and pizza won’t change your body.

Q | What is one thing you wish you could do better in the gym?

I have a hard time lifting heavy with my legs — maybe it’s because of my two knee surgeries? Hmmm…I also have a really hard time running long distances. I have a short stride, so I’m super slow.

“I can’t believe our first shoot was in the basement of the church! I was just telling my friend this story the other day. I remember feeling sooo excited to finally be in my favorite magazine, Oxygen.

My dream was always to be on the cover. I even photoshopped myself on it and hung that on my vision board in 2016, but I never really thought it would happen. I am glad it happened now because I am finally fully ready for it!”