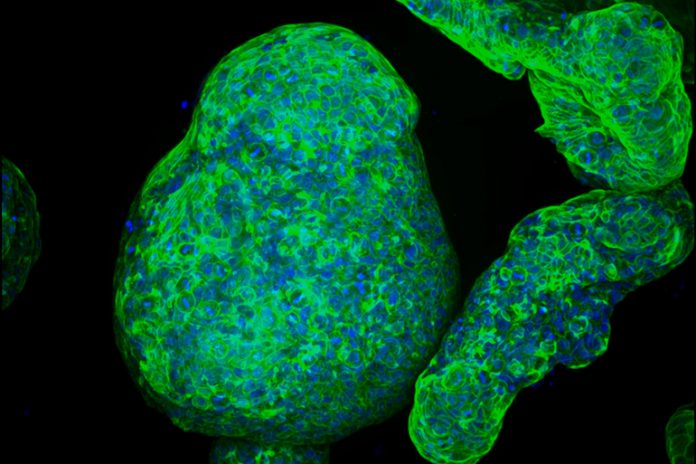 A team at MIT has developed a technique to grow organoids, both from healthy and cancerous pancreatic tissue, using a synthetic gel that predictably mimics the pancreatic extracellular environment. Compared with naturally derived materials, the synthetic gel is consistent from batch to batch, meaning that it leads to more reproducible and predictable results when growing organoids. The MIT researchers hope that the technology could advance organoid research, both pancreatic and otherwise.

Cancerous pancreatic tissues are not easy to grow and study in the lab, as they lose their cancerous characteristics relatively quickly when cultured. However, given the particularly poor prognosis for pancreatic cancer, tissue culture models that effectively replicate this cancer in the lab would be very useful for gaining a mechanistic understanding of the cancer and identifying new treatments.

Organoids are an attractive way of studying tissues. With their self-assembly and three-dimensional shape, they resemble tissues in the body much better than simple cell monolayers grown on tissue culture plastic. However, organoids are not necessarily easy to grow.

Controlling the environment of such tissue samples is paramount, particularly if the results are to be reliable and reproducible. However, the natural materials used to mimic the tissue microenvironment for such tissue culture systems are often derived from mouse tumors, and can contain undesirable substances. They can also vary from batch to batch, making repeatable experiments difficult.

“The issue of reproducibility is a major one,” said Linda Griffith, a researcher involved in the study. “The research community has been looking for ways to do more methodical cultures of these kinds of organoids, and especially to control the microenvironment.” The gel developed by the researchers is based on polyethylene glycol (PEG), which is commonly used in medicine, mixed with extracellular matrix components, such as integrins that allow cells in the gel to adhere to it.

So far, the MIT team tested the new technique using pancreatic cells from mice, both cancerous and healthy, and were able to grow pancreatic organoids using either type of cell. The technique may allow researchers to study pancreatic cancer in more detail, and test new treatments in a more realistic cancer environment.