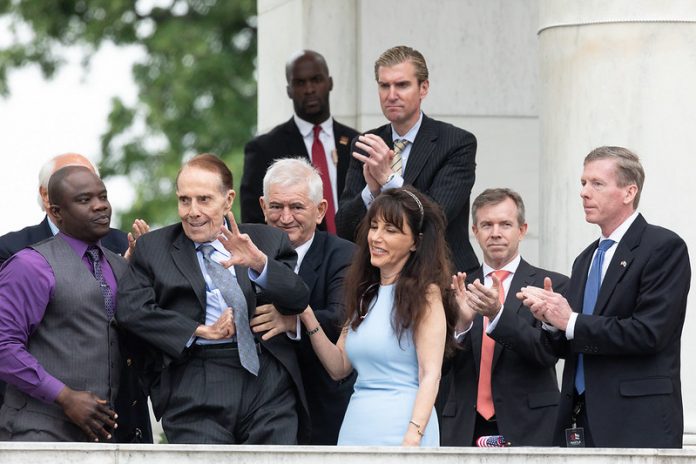 With his usual directness and humility, former Kansas senator and Republican presidential candidate Bob Dole, 97, announced in February that he is suffering from lung cancer.  It was the second time he had announced a cancer diagnosis, but less exceptional than the first time. In 1991, his office released the news that he had undergone surgery to remove his prostate gland after it was found to have a slow-growing cancer.

In a 1992 article in the Saturday Evening Post, Dr. Cory SerVass, M.D., wrote that for six years the search had been on for a man to have the courage to go public about prostate cancer as Betty Ford had done for breast cancer.

“We have found our prostate pin-up man…,” SerVass wrote of Dole.

Dole told SerVaas that there was a difference of opinion among his staff about whether he should go public, “but it seemed to me that you ought to tell people right up front you’ve got a problem and if it’s resolved, then they don’t have any doubts about it.”

When he made the announcement, he said, calls and mail came in from all over the country. Some offered support and others who had undergone the surgery were searching for help and “wanting to know if I had any ideas.”

“So, it occurred to me (maybe you can make a plus out of a minus) to get busy and start contacting some of these people and learning more about it,” he said.

Because it was detected early during a routine physical, Dole made a full recovery and began urging other men to get regular checkups.

Two years later, in 1994, encouraged and supported by Men’s Health Network, a national non-profit devoted to men’s health, he worked with Rep. Bill Richardson, D-N.M., to pass legislation creating a national Men’s Health Week to heighten awareness of preventable health problems among men and boys. Men’s Health Week has since become Men’s Health Month, celebrated during June. It seems an appropriate time to honor Dole for his role in improving the lives of so many through his advocacy.

The need to bring greater awareness to men’s health issues is incontrovertible. Men die, on average, five years younger than women. They become ill at a younger age, suffer more illness during their lifetime and have more chronic illnesses than women, medical studies and statistics show. They have a higher suicide rate than women and account for 92 percent of workplace injuries. Biological, social and behavioral factors all contribute to this discrepancy, but men’s reluctance to seek medical care on a timely basis plays a major role.

“Senator Dole is, as most of his colleagues know, a joy to work with and rarely without a smile,” Richardson, who served as governor of New Mexico from 2003 until 2011, said in a recent email. “The Senator and I, despite being from different political parties, worked together on many issues, in addition to men’s health, that we both cared about. Both of us worked with families of prisoners of war and soldiers missing in action. … I miss the days when politicians from different parties could put their partisan rhetoric aside to work together to improve the lives of Americans.”

Dole was known for his willingness to work across party lines to get things done.

“One of the things that I always liked about Bob Dole is that he could fight you like no tomorrow, but he never closed the door to actually do something that could benefit a real person,” former President Bill Clinton once said about Dole’s leadership of Senate Republicans during the first term of Clinton’s presidency.

Dole’s commitment to veterans grew out of his World War II service, which earned him two Purple Hearts and a Bronze Star. During an attack on a German machine gun nest in 1945 in the Po Valley in northern Italy, he attempted to rescue an Army radioman wounded by German fire and was severely wounded himself. His injuries included a shattered right shoulder, fractured vertebrae in his neck and spine, metal shrapnel throughout his body and a damaged kidney.  The medics who examined him on the battlefield thought him unlikely to survive and gave him the biggest dose of morphine they could dispense.

He not only lived, after several surgeries and extensive rehabilitation, he made a better recovery than anyone expected, but he was left with a paralyzed right arm and hand. He became an advocate for the disabled throughout his career and played an pivotal role in the passage of the American’s with Disabilities Act in 1990.

Dole laid out his plans to go into politics while recuperating from his war wounds at a veterans’ hospital in Battle Creek, Mich., according to Sen. Daniel Inouye, D-Hawaii, another young soldier recovering from wounds in the same hospital. Inouye recalled Dole saying he planned to return to Kansas, run for local office and then for the first Congressional seat that opened up. And he did. After serving three terms in the House of Representatives, Dole was elected to the Senate in 1968, where he represented Kansas until his failed 1996 Presidential bid.

His optimism wasn’t the only thing that saw him through his recovery. In his book “Great Political Wit, Laughing (Almost) All the Way to the White House,” published in 1998, Dole wrote of learning the value of a sense of humor during his teen years working at Dawson’s Drug Store in Russell, Kan. “I learned…that the more you traded quips and one-liners…the bigger the tips. A few years later, I was to become one of countless veterans who discovered that a sense of humor was essential to surviving surgery, pain, and month upon month of hospitalization.”

Though legislation creating National Men’s Health Week won’t likely top his list of achievements, it may be one of the most impactful laws he championed.

Hundreds of states and municipalities recognize Men’s Health Month as a way of focusing awareness on the issues related to men’s health. Every man who has a better health outcome thanks to that awareness and every family that benefits as a result will be part of Sen. Bob Dole’s legacy.

How To Stay Mentally Sharp As You Get Older

Podcast #724: The Strange Science of Sweat