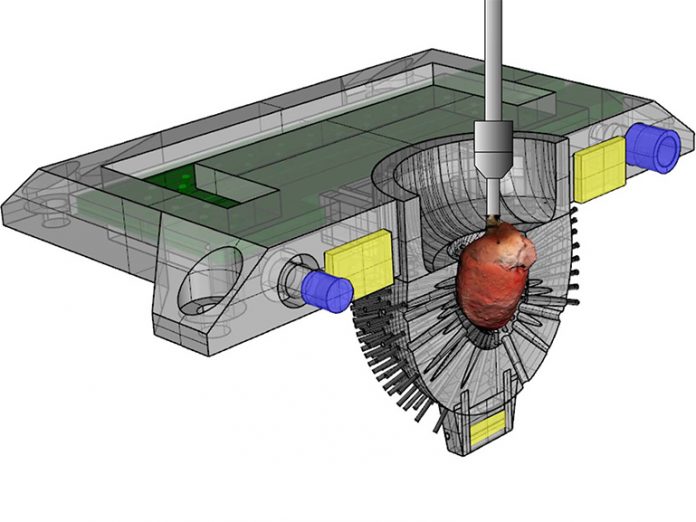 At the University of Bern in Switzerland, researchers have developed the Panoramic Opto-Electrical Measurement and Stimulation (POEMS) system, which allows them to conduct advanced optogenetic experiments with mouse hearts. The device, which contains a volume into which a mouse heart can be placed, lets the Swiss team stimulate various cell types using light, and then measure the resulting electrical response. Previously, scientists had no way to track electrical activity and provide accurate optical stimulation at the same time. The new technology may help to determine the contribution of various cell types to cardiac function and disease.

The electrical impulses that trigger the heartbeat are a fundamental part of cardiac function, and when they go awry, arrhythmias can result. Once thought the exclusive responsibility of cardiac muscle cells, there is evidence that other cell types, such as cardiac fibroblasts, may play a role in this process. Some of this evidence has been obtained using optogenetics, a technology in which cells are genetically modified to become light responsive, allowing researchers to trigger their activity using light.

While optogenetics is very useful, to date it has been difficult to trigger cells within animal hearts using light, and also monitor the electrical response of the heart. This latest technology aims to combine these modalities into one device, allowing for unprecedented research into heart function.

“With our POEMS system, all of these disadvantages have been overcome, as the entire surface of the ventricles is covered with a combination of optical and electrical measurement and stimulation sites, which allows free combinations of both modalities,” said Professor Stephan Rohr, a researcher involved in the study, in an announcement.

The new system contains a cup into which the researchers can place a recently excised mouse heart. They constructed the cup based on the structure of the mouse heart, and the device contains 294 optical fibers on its inner surface, along with 64 electrodes. The electrodes and optical fibers can be controlled individually for precise control over which areas of the heart are investigated.

“With the POEMS system in place, we are presently investigating the burning question of whether cardiac arrhythmias can also be caused by non-muscle cells such as activated connective tissue cells,” said Rohr. “If this should be the case, it would open up new avenues for the treatment of cardiac arrhythmias as cell types different from muscle cells may become targets for anti-arrhythmic therapies.”

Via: University of Bern